Mindless Eating And Your Weight

What Is Mindless Eating?

When you don’t pay attention to the food you’re eating and do not notice how
much food you have consumed, then you have a habit of eating mindlessly

Mindless eaters don’t pay attention to food as much as they should, which is why it’s often typical for them to eat a piece of cake even when it’s stale and doesn’t really taste that good.

On the other hand, a mindful eater is aware of everything they eat and they use this awareness to maintain a healthy lifestyle.

The best example of mindless eating would be popcorn at the movie theater. Namely, the taste of the popcorn (according to an experiment that is mentioned in the book Mindless Eating: Why We Eat More Than We Think, written by food psychologist Brian Wansink) doesn’t even matter to people who are in the theater. Even if it’s stale, they will eat it because they aren’t paying attention to the food; they’re paying attention to the movie.

There is no attention paid to the portion being consumed or the fact that a half a cup of popcorn is all that is really needed for a snack, and the movie portion is more like 4 cups. As long as the movie projectors are still running, we will be munching on the snack. 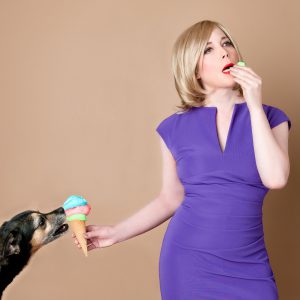 Since all of your attention will be directed towards the movie, you will not notice how much of it or how fast you’re eating or even realize that you’ve been full for some time.

The aforementioned food psychologist, Brian Wansink, notes that there is a huge difference between eating until you’re full and eating until the plate is empty. The latter means that you’re probably eating mindlessly.

Another example is eating in front of the television where you hardly pay attention to the food, what you are eating, or how much of it you ate.

Mindless eating is a habit that people develop early on in their lives. For example, many kids fall into the trap of eating this way due to the size of the bowl from which they eat their cereal. Namely, if you give a kid a 16-ounce cereal bowl, they will pour much more cereal in it than if you gave the same kid an 8-ounce bowl.

What Happens During Mindless Eating?